At Mandeville Primary School, we recognise that a high-quality physical education curriculum should inspire all pupils to succeed and excel in competitive sport. It should provide opportunities for children to become physically confident in a way which supports their health and fitness. Opportunities to engage in competitive sport and activities develops their competence and also helps to embed values such as fairness and respect. 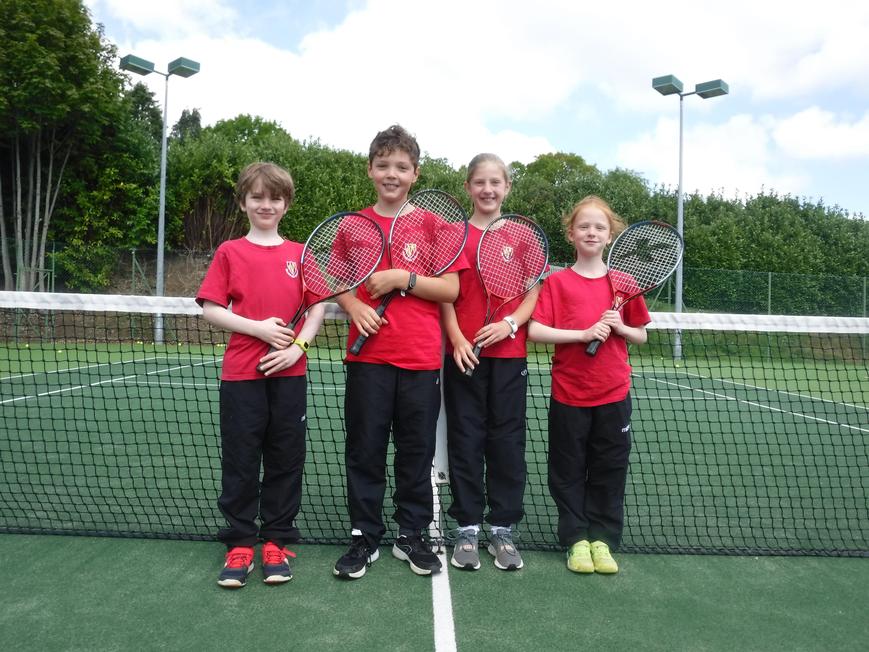 On Thursday 5th May, Ava P, Alice, Julian and Ben attended a Mini Tennis competition, held in Bishops Stortford Tennis Club, and came 4th. We had a lot of fun and played four games each against Hillmead, Reedings, Northgate A and Northgate B. Northgate A team won. We felt nervous but also excited. Altogether we scored 148 points and won 14 matches!  The competition was SO CLOSE! Julian tied three ways with two other children for best player in his group. We learnt a lot about tennis, like let it bounce before you hit the ball and don't whack it too hard. 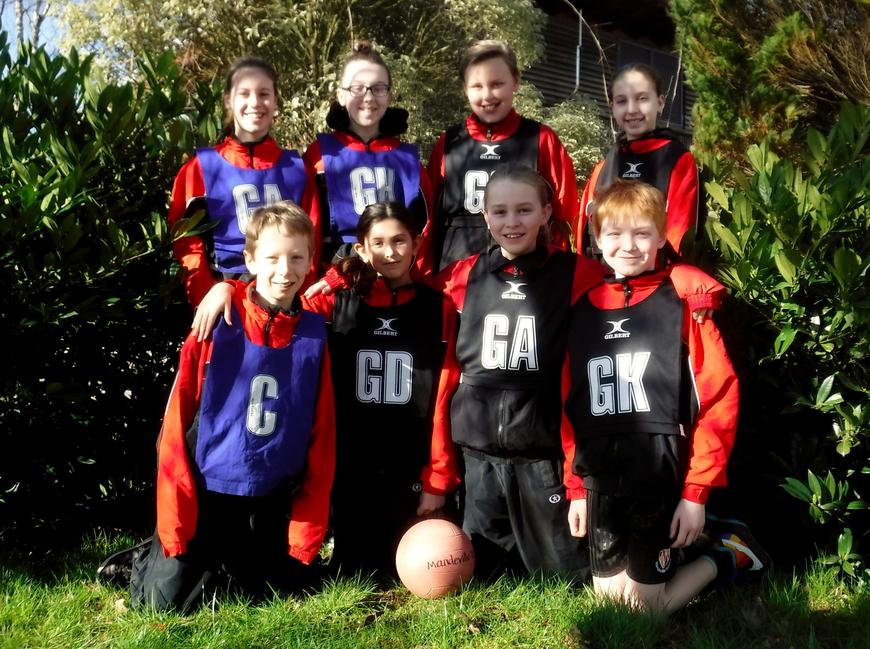 On Thursday 17th March, we arrived at a ‘Bee Netball’ competition at Birchwood High School. Eight children from Year 6 competed. One of our favourite moments of the day was when we beat Reedings 2-0. We all played really well because we used teamwork and strategy. We learned to improve our passing skills and that you don't have to win to have fun. We felt excited, energetic and a bit nervous at the beginning, until we beat Reedings! We would definitely love to do it all again.

by Oliver and Isabelle, Year 6 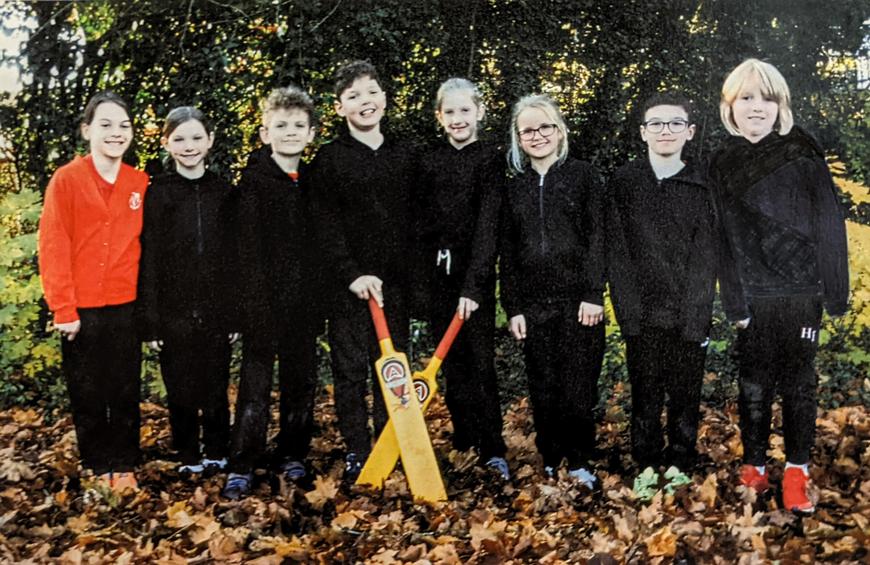 On the 2nd December, we played Rapid Fire Cricket with the whole of Year 4 on the school field. We played Rapid Fire in our P.E. houses. Blue house came in first place, then red, then yellow afterwards and then, finally, green. It was a very close competition.

In Rapid Fire you have to remember to hit the balls at the same time as your batting partner. It was fun batting and lots of people were enjoying doing that. The fielders have to wait until ALL of the balls are hit. It's easy to forget that bit! As the name suggests, you have to be very fast in Rapid Fire Cricket. You have to concentrate on hitting the ball when you're batting. I was scared of the ball hitting my head when I was fielding, but it didn't happen after all.

It was fun and we really hope we get to do it again.

by Irina and Frankie, Year 4 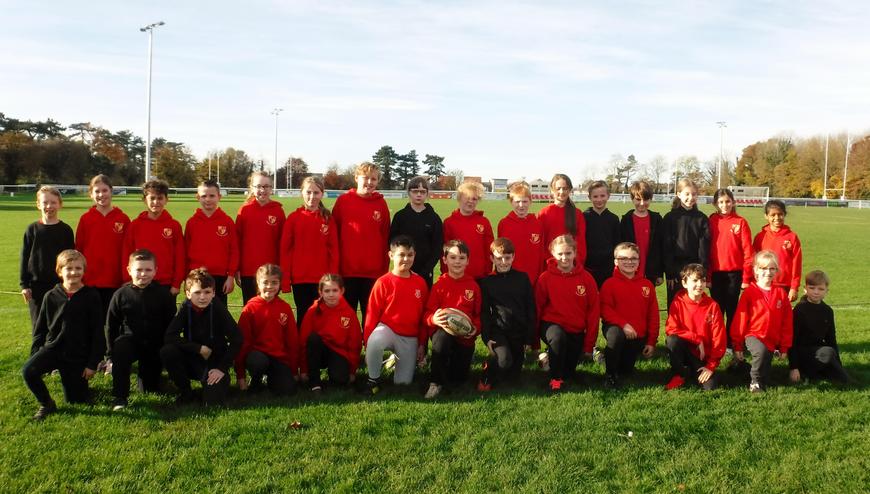 in Bishop's Stortford Rugby Club. We played numerous games of tag rugby against many different schools. We were separated into three groups and played different skill levelled teams. During this experience, everyone had a fabulous time and improved on their skills from before this event. In the games, we would get together as a team and give good tactics to all. Most of us achieved our set goals for this tournament such as scoring a try, tagging opponents, and having a lot of fun. Some people even discovered new rules we didn't know about before. In the future, we all agreed we would love another opportunity like this one again. 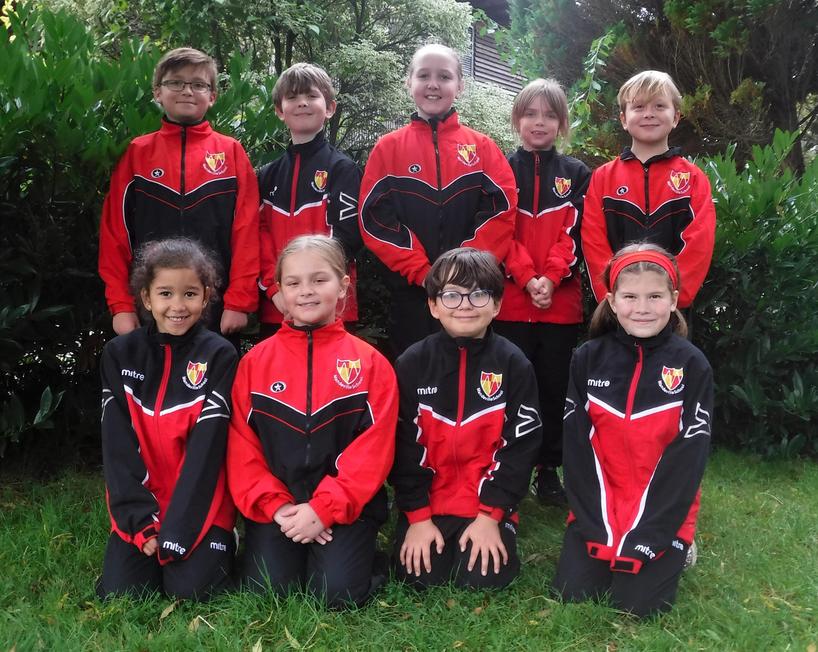 "On Thursday 14th October 2021, ten classmates went to Tri-Golf at Birchwood High School. We used a chipper and a putter. We felt nervous and excited. When you first arrive, you are nervous but after you play 1 or 2 games, you're happy and you want to carry on. There were nine minigames and one rest. It's not about winning; it's about having fun. You were a bit under pressure thought because you had to be fast. We were sad it was over and nervous to see what place we came, and we came... 7th! We got certificates for being co-operative as well. The Buddies helped a lot with practising before we went. When we're in Year 6, we would like to be Buddies to and to help the next Tri-Golfers get ready for their competition. We would 100% like to go to another sports competition."

by Harry and Ivy, Year 4 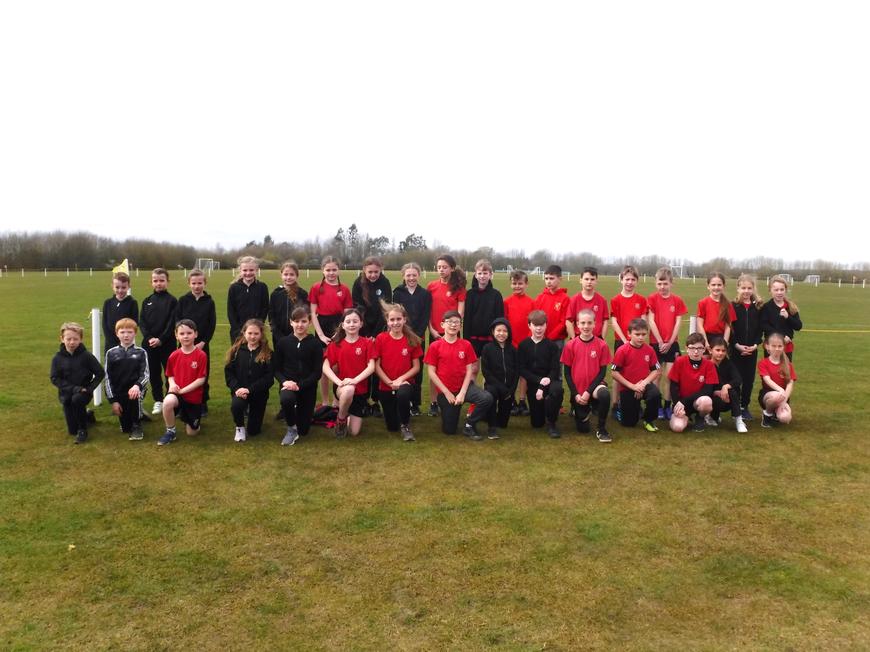 "On Friday 13th March, a selection of people from Key Stage 2 went to Jobbers Wood in Much Hadham to compete in cross country. It was called Bishops Stortford High School Invitational Cross Country Race. We left at 11.30am and arrived at 12.10. We felt nervous at the start but a little bit excited as well. We set down our things and the year 4 girls started training because the girls race was in half an hour. At 1 o'clock the girls race began. At the end of the race, all the girls were exhausted. After a while, the year 4 boys race began. Everybody encouraged the year 4 boys. Once they were done they were ecstatic they all finished in the first 50% of the runners. We all felt very proud of ourselves for having run a mile but we all learned to control the pace to avoid sprinting off from the start, which would have resulted in early fatigue."

by George S and Ava, Year 4 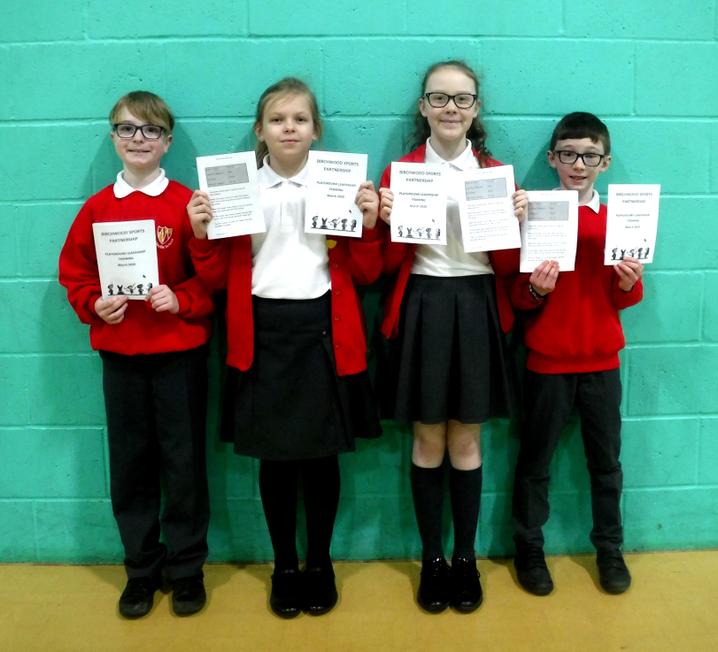 "On Wednesday 11th March, William, Martyna, Hannah and Joshua participated in a play-leader course at Birchwood High School. We started off by interacting with students from other schools. We told them out name, our hobbies and our favourite memory. At the start of the session we all felt quite nervous but very excited. We went through a PowerPoint presentation and learned how to be a good leader. After that, we worked with another school to make a game and set it out like we were on the playground. At this point we were feeling more comfortable than at the start when we felt nervous and shy. Finally, we let other children play our games and played other schools' games and gave them feedback on what they could improve. I think we enjoyed the day because we interacted with other children we didn't know before. We would really like to do this again in the future."

by Joshua and Hannah, Year 5 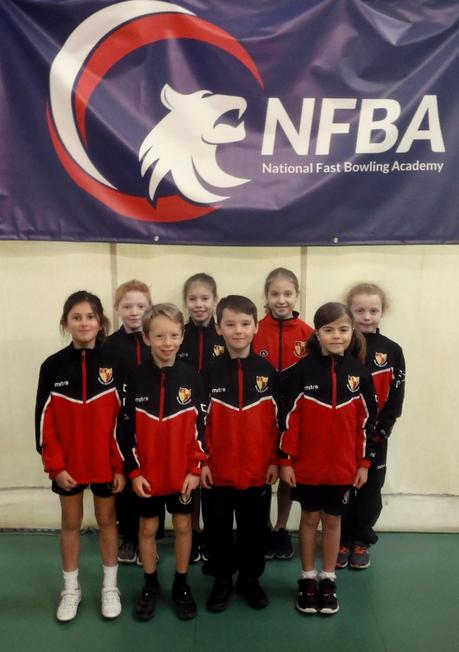 "We went to a Rapid Fire Cricket competition on Thursday 5th December. It was held at HECC. Mrs Brett and Mrs Barrett picked out four boys and four girls to come to this competition. We got into the semi-finals against Windhill 21 and we only lost by 7 runs. We had a good first game, which we won 62-33! All of the team members improved throughout the day. We mad a lot of progress working as a team and we really enjoyed it."

by Jacob, Oliver and Ava, Year 4 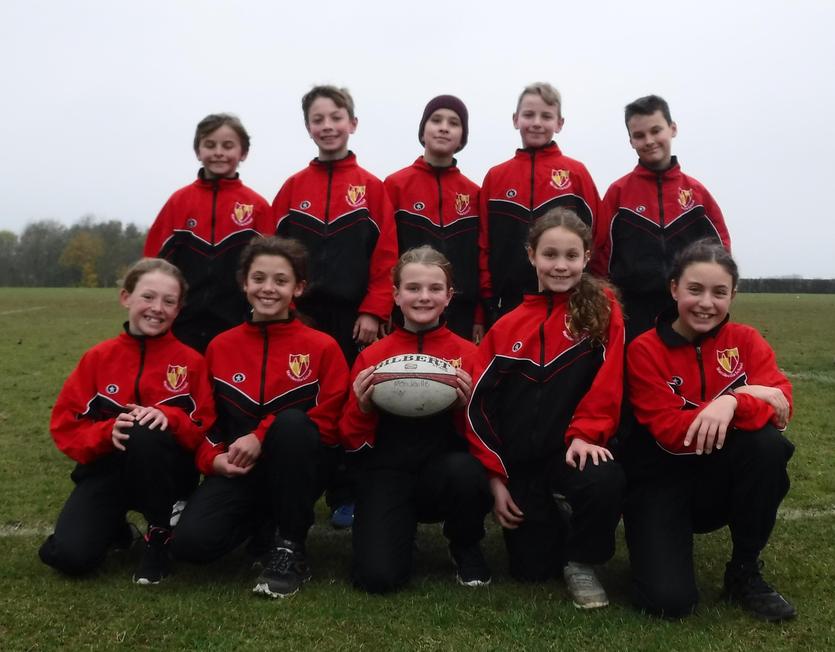 "On Thursday 21st November, ten children were chosen to compete in the tag rugby tournament at Leventhorpe School. Our first game was against Spellbrook and we won 5-3. Our second game was against St Andrews and we lost 5-2. In the next game we were against Hatfield Heath and we struggled. They were a really good team and they ended up winning heavily. After that we had a little team talk before we played the fourth game, but unfortunately we lost that game too. The next game was the game we really wanted to win. It was against Reedings. It could have gone either way but unfortunately we lost that one too. The next game was against High Wych. We lost it but it we could have won. The referee made some decisions that didn't go our way."

by Luis and Ethan, Year 6

"On the 24thOctober 2019, Mandeville took part in a hockey tournament at Birchwood High School. Before we arrived at the pitches we all had our photo taken. Next, we were split into 3 squads of 10. We took our hockey sticks and went off to our separate pitches. We talked about tactics to our squads and sorted out who would play in the first match. 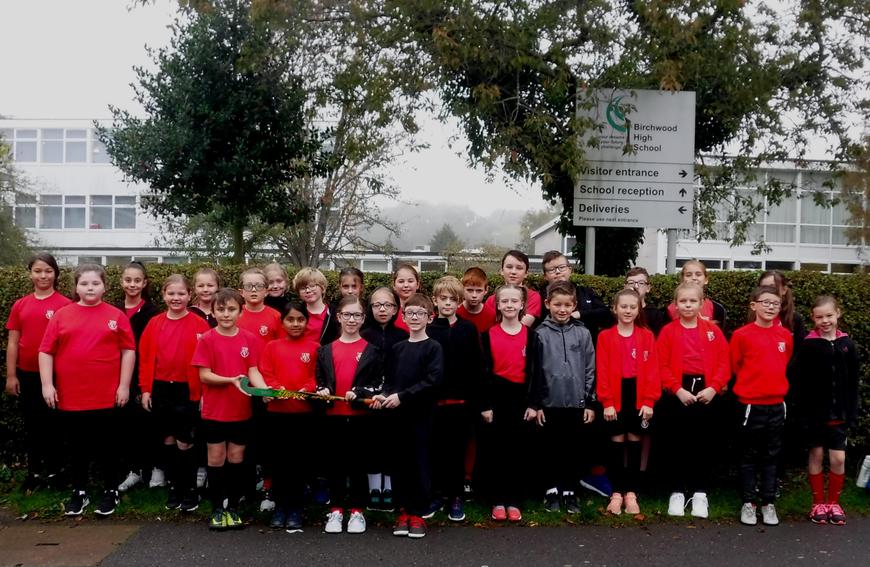 In our first match we didn't do as well as we hoped, but we still had lots of fun! Before our second match we watched other games and picked up new tactics. We did better in our second match but still made a few mistakes. We WON our third match! We were so pleased with ourselves! In our last match we still did great and drew! We kind of knew that we wouldn't be continuing in the top 4, but Mrs Brett (one of our coaches) checked anyway. We made our way back to the coach very pleased with ourselves. We came back to school and ate our very well deserved lunch!" 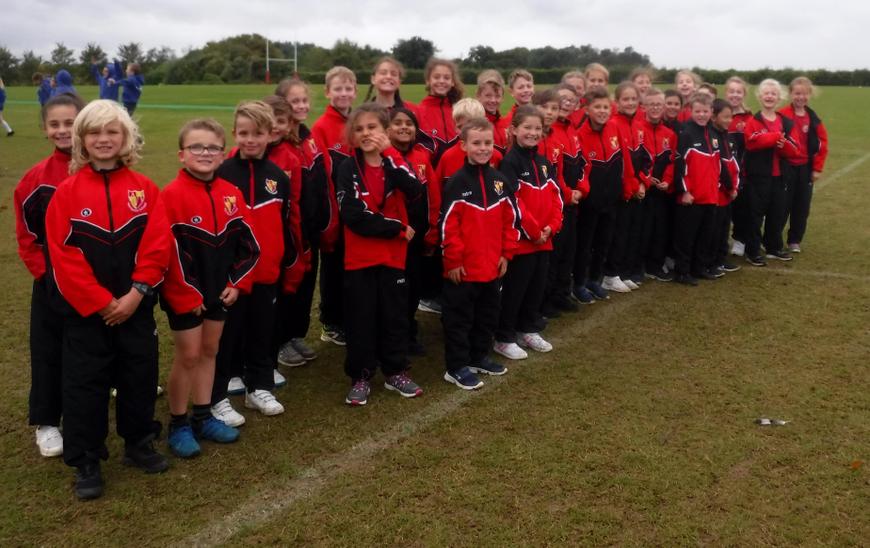 “On Friday 11th October 2019, selected pupils from key stage 2 went to Leventhorpe School cross country. We felt a little nervous and then, after doing the warm up run led by some Leventhorpe students, we felt better, more prepared and relaxed for our race. Then we watched and supported the other year groups. Next we were called over and Mr Palmer explained the course to us: Year 5 girls and boys do 2 laps of the Leventhorpe field. It was very windy and wet. Annabel came 4th, Daisy 5th, Jake 6th and Harrison came 16th. We all felt very tired. We waited for the rest of key stage 2 to finish and got our tracksuit back on. We scored 729 points! It was very fun.” 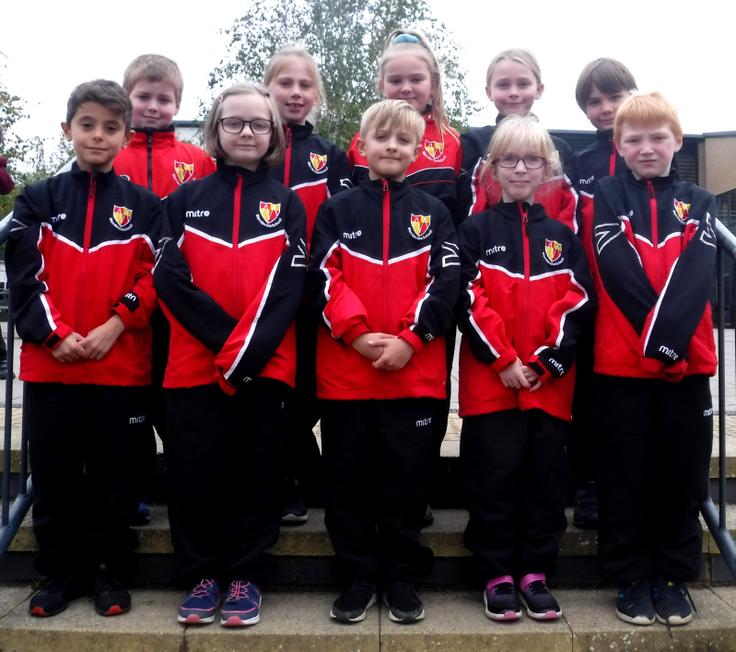 "We went to tri-golf. It was very (and I mean VERY)  fun and we beat our mortal enemy, Reedings! Everyone loved it and Olly was a very good chipper and Romer was a very good putter. We came 4th out of 11 schools. When I told some people they were very happy. Please let us go again! Please!"

"We went to tri-golf. It took place at Birchwood High School on Thursday 10th October 2019. 10 pupils were selected from year 4. We came 4th out of 11 schools. It was really fun. I learned what tri-golf was. I felt excited, happy and nervous. We did lots of different, fun tri-golf games in the tri-golf competition. The people who were explaining what we needed to do were really good at explaining it. I would love to do it again or something like it. We had great team members. We LOVED it and would all love to go and do a tri-golf competition again." 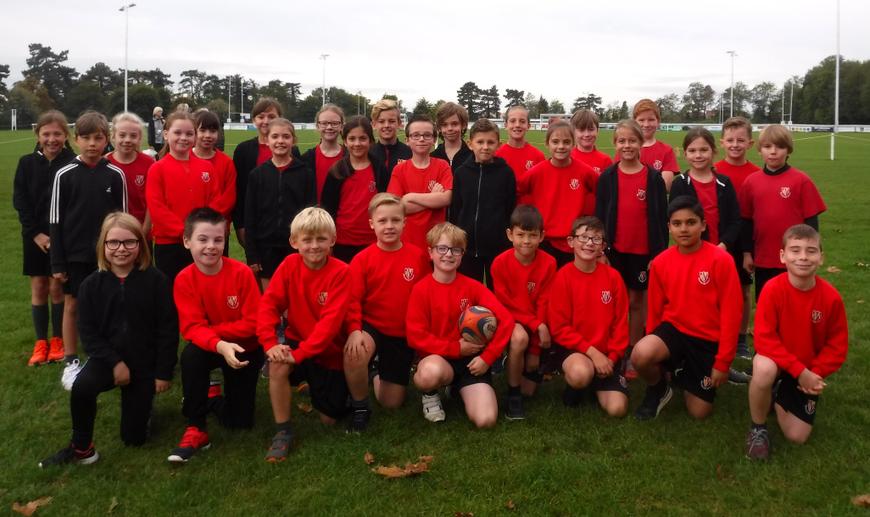 "On the 3rd  October we went to a tag rugby festival. First we had a quick break for lunch, then we got split into three groups. We were all excited to start the festival. It wasn’t about how many tries you scored it was about having fun and sportsmanship. We had small breaks after each game. It was so much fun we hope to experience this again. Thank you for reading our write up!"

"Some Year fives went to a tag rugby festival on Thursday 3rd October 2019 at Bishop Stortford Rugby Club. We played 4-5 games of tag rugby. We learned how to show good sportsmanship and to play fairly. We felt confident and excited for the event. It was fun because we didn’t need to worry about winning because it was a festival not a tournament. We would love to do something like this again although we would also want someone else to get to have a go."

Unfortunately not the ones with chocolate chips.

Some cookies are necessary in order to make this website function correctly. These are set by default and whilst you can block or delete them by changing your browser settings, some functionality such as being able to log in to the website will not work if you do this. The necessary cookies set on this website are as follows:

Cookies that are not necessary to make the website work, but which enable additional functionality, can also be set. By default these cookies are disabled, but you can choose to enable them below: